Look what I found while walking through the neighborhood! A very pleasant bowl of bones for us dogs do enjoy. Fake bones, to be sure, but it’s a nice thought, and even fake bones are edible.

Just when I despair of humans, and worry that you are mostly beyond hope, I’m happily surprised to find a small treasure like this. 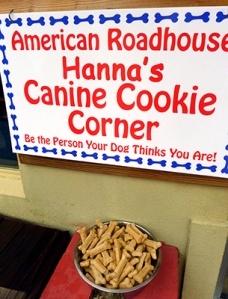 When such a useful surprise appears, it reminds me that there ARE lots of very nice humans, such as the fine people at the American Road House in Atlanta. THEY put out snacks for dogs to enjoy while we wait on their humans to go inside and stuff themselves silly.

That shows us that the folks at the Roadhouse are going beyond the selfishness of most humans by showing the world how much they care for dogs. That’s nice!

Another day, I’ll address the manifest unfairness of humans eating hamburgers and steaks at the Road House while dogs must sit outside, chomping on these little fake bones made of compressed gruel of some sort and meat flavoring.

But not today. Today I’m very happy to see the bowl of bones, even though they are not really bones.. Today, it’s the thought that counts. (And even fake bones are better than no bones, I think you’d agree.)

So we dogs will happily wait for you, chomping on cereal bones while you have steaks or chops or ham or bacon. And we don’t really mind too much, as long as you bring us a bit of burger as a reward for waiting!

A mouthful of nice, real meat to cover the taste of the cereal. A small hunk of ham, or a bit of bacon, or even a slice of steak would be most welcome, you know. Because the bowl of artificial bones is nice . . . but it’s not the real McCoy. We’ll certainly eat these “bones,” but we aren’t fooled for a minute!

We want a real snack

You didn’t forget THAT, did you? That little taste of burger for us? That reward for waiting?

Because, if you forgot the burger snack, if you didn’t bring me some of the real meat that smells so good, well, you won’t be the person you think I think you are.

Be warned: if you forgot my meat snack, you’ll just be another human, and NOT the hero you think I think you are.

But, a few bites of that wonderful Roadhouse burger, and you will be a hero! The very one you THINK I think you are!