Have You Ever Seen a More Noble Dog? 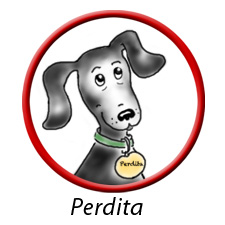 If you read my books and this blog, you know how important my dashing dog father, known far and wide as Par Whack, has been in my development as a thoughtful young dog writer.

Par is a true hero. A dog who knows his own mind and who does exactly–exactly!–as he pleases. A dog who often–VERY often–runs afoul of human rules and petty laws. Thus, Par is a dog who is on ‘Most Wanted’ lists all over the country.

Par is an adventurer, you know. He hates boredom, and is always out and about, sniffing out the next big adventure, always alert for a vehicle to borrow and drive, always aware of food that is easily snatchable. We never know where he will pop up for his next caper.

Because Par is such an vagabond and hero, I actually have not seen him in quite a while, but I hear news about his escapades very often in the evening Bark-Around-Newscast. Par sets the standard for the uber dog-about-town.

So, it was with utmost pleasure that I saw this framed painting of his noble visage. Yes! It’s 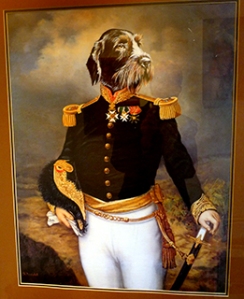 Par in some kind of military regalia. It was hung in a place of honor in a regular Castle, too–Castle Lady Hawke, way up in the North Carolina mountains.

I ask you–if the owners of a Castle–a real castle with turrets and winding staircases, have a big portrait of Par hanging in a place of honor, isn’t that something? Isn’t it a certain sign that my family is filled with the noblest dogs?

Imagine! Par, in his infinite adventures, has become a dog general. Or maybe a viscount. Perhaps he’s even a duke. And a famous one, too.

I am so proud to be a Whacknoodle!

2 Responses to Have You Ever Seen a More Noble Dog?